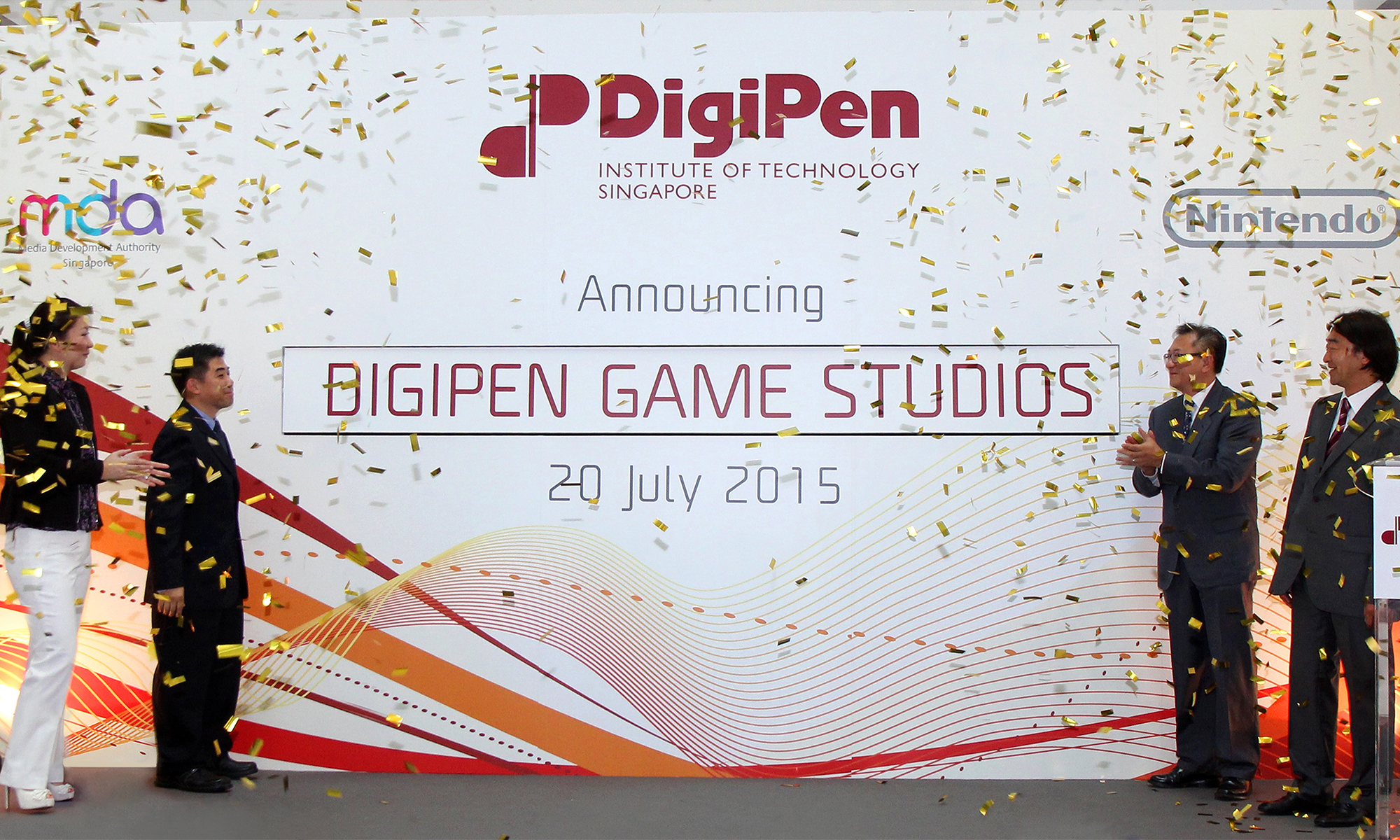 DigiPen Institute of Technology Singapore is pleased to announce the establishment of DigiPen Game Studios (DGS), a new venture in video game development support and publishing.

Founded in North America in 1988, DigiPen is the world’s first college to offer a bachelor’s degree program dedicated to game development. DigiPen’s comprehensive curriculum enables its students to directly experience what it takes to become successful and valuable members of the interactive media community. The Singapore campus, which is DigiPen’s first international facility, opened its doors in 2008 through a partnership with Singapore’s Economic Development Board.

Nintendo has been affiliated with DigiPen since 1994 when they partnered to jointly establish a post-secondary program in video game programming.

The DGS initiative, which is being supported by both the Media Development Authority of Singapore (MDA) and Nintendo, represents a new opportunity for independent game developers to take advantage of the best in game education, research and development, and industry expertise.

The role of DGS, a division of DigiPen (Singapore), will be two-fold, acting both as an industry developer and publisher. Broadly, DGS looks to advance the game industry by partnering directly with the most talented independent developers in Southeast Asia and bringing their game ideas to the global marketplace.

Initially, DGS will work with third-party developers to have their game projects developed and published for the Nintendo 3DS™  system. Later on, DGS titles may progress to other platforms, including but not limited to other Nintendo systems. As an added benefit for Singapore-based developers, MDA will also support DGS programs and activities.

So how can game makers partner with DGS?

Beginning this fall, with support by MDA and Nintendo, DigiPen (Singapore) will organize the first annual DigiPen Game Conference for third-party developers. This will culminate in a “Call for Proposals,” whereby interested developers from Singapore can submit original game concepts to be evaluated by DGS with support from Nintendo.

The best proposals will then be selected for development and publication through DGS and digitally distributed to a global audience through the Nintendo eShop. Throughout the entire process, DGS partner developers will have access to valuable mentorship, business support, game development expertise, and technical insight from DigiPen (Singapore)’s faculty and R&D team.

“The ultimate goal of DGS is to expand the game industry in the Southeast Asia region,” said Mr. Jason Chu, Chief Operating Officer International of DigiPen Institute of Technology. “For many years, we have looked forward to such an opportunity that would allow us to contribute to all aspects of the game development ecosystem — beginning with higher education and workforce development. Now, through DGS, we will also have a way to help our Singapore-based graduates, as well as other game developers, to produce high-quality products of their own making and have them be published and distributed on a major gaming platform. We look forward to bringing out the best of what developers in the region have to offer and helping them share their work with the rest of the world.”

DGS aims to begin working with third-party developers by the end of 2015, with the earliest game projects to be published by late 2016 or soon after.

“MDA is pleased to support industry leaders like DigiPen and Nintendo in their effort to help advance Singapore’s game sector. The DigiPen Game Studios will give our developers the opportunity to create games for Nintendo’s popular platforms that reach a global installed base of gamers,” said Ms. Angeline Poh, Assistant Chief Executive (Industry), Media Development Authority of Singapore.

“Nintendo is honored to be involved in this opportunity with DGS and to support the strong development community within Singapore,” said Mr. Takao Yamane, General Manager of Licensing at Nintendo Co., Ltd. “We cannot wait to see what unique games will come from this relationship and we’re excited to help share and promote these Singaporean developers to a global audiences.”